Even before I took up photography, I have always appreciated a really good sports action photo. In a future blog, I'll share what I consider to be my top five, but today I wanted to share five tips that can help you take better sports action photos. I have used them over the last several years, and I have managed to get some nice shots in a few different sports. So here we go . . . 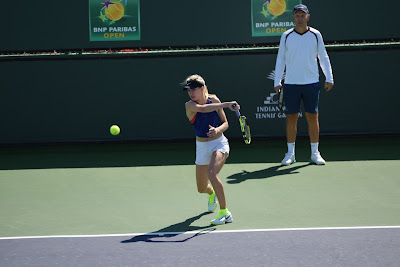 Like anything else, getting a good sports action photo takes preparation and planning. And that starts with knowing the sport that you are going to shoot. I've spent the most time shooting basketball and tennis. I've also spent some time getting shots at a spring training baseball game. By "knowing the sport", I mean understanding how to watch it. I prepare for shooting these sports by looking at photos that professionals take to note the sight lines they are using. Then when I get to the location, I take some time to walk the areas where I think I'll be able to take some good shots, depending on the crowds and the position of the sun. When the game starts, my goal is to shoot from at least three or four different locations so I can get a little variety. One other thing to keep in mind when it comes to knowing what you are shooting: identify key players and note their tendencies. This will help put you in the right position to get a good shot. There is nothing better than having the action come right at you as you are trying to get one that is a keeper. I went back to the photos I took at BNP Paribas Open tennis tournament at Indian Wells last year. The practice schedule showed Eugenie Bouchard practicing in the early afternoon. She was expected to go deep into the tournament, so I figured there would be plenty spectators watching her practice. I got there a little early and found spot where she would be hitting right to me. I didn't have any credentials, so the closest I could get was the first couple of rows in the stands next to the court. It turns out that was good enough. Here is a nice shot I got of Bouchard's forehand. 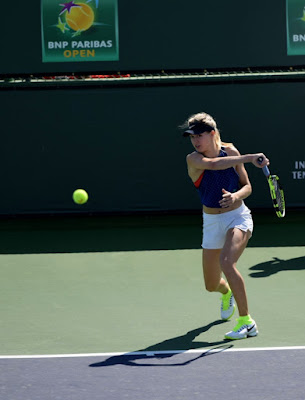 Once you are able to identify a good spot, your next goal is to get shots that are as tight possible. It is a great way to bring the person viewing the photo into the action while eliminating whatever is not relevant to the shot. Cropping the shot later will allow you to do that even more. The photo here is the same one of Eugenie Bouchard taken above, but I cropped it tighter to eliminate the guy standing behind her. See the difference? Now it seems like she is playing against me. One other thing to keep in mind. Don't get into a rut holding the camera the conventional way all the time. It might feel more natural, but in certain sports, going vertical can provide a much better perspective.

Facial expressions and emotions are such a great part of sports action photography. That is why I tend to favor sports where you are more likely to capture them. It's one reason I haven't spent a lot of time taking pictures at football games.  Although I will say that getting that facial expression through the helmet is pretty cool. Sometimes you can get some nice shots even if it's slightly away from the action. Here is a a photo I got at a youth basketball game a few years ago. The players are preparing to grab the rebound on a free throw attempt. 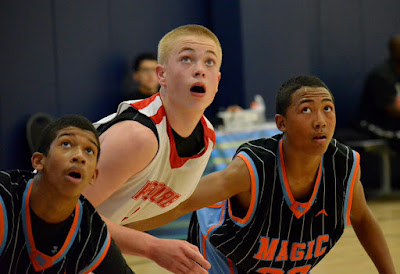 They are about 12-13 years old. I recall that this was a pretty close game and every possession counted. You can see the anticipation on their faces as the free throw approaches the rim. I don't remember who got the rebound though. This shot could have been framed a little better because I cut off the last three fingers of the middle player. I did manage to capture it in the very next frame, but I liked these facial expressions better, which was what I was trying to get. I also wasn't able to get the left hand of the player on the right. Here is a second photograph from another game. This player is actually my son. He was nine years old at the time. In this shot, he had just grabbed a defensive rebound, and had begun bringing the ball up the court. This one caught my eye because of the intense focus on his face. I find shots like this one to be just as, if not more, compelling when shooting youth sports. 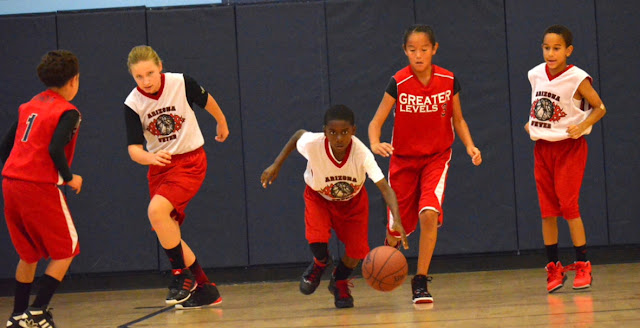 One thing that happens to me when I go shoot sports is that I start to get caught up in the game and I stop shooting for  a while. This is especially true when I am watching my son play. But I have tightened that up quite a bit lately by designating blocks of time during the game when I will concentrate solely on taking photos. The key is to get out there as much as you can so you can keep honing your skills. You may not get to the 10,000 hours that Malcolm Gladwell espouses, but every hour counts. Your sense of anticipation and timing will improve, and that can be the difference between a good shot and a great one.

One mindset I have always had is that no matter how proficient I feel I have become at something, I know what I don't know. It's no different with photography. I have two friends that I often talk to prior to shooting a particular event. One was a professional  and still has an incredible portfolio of photos taken all over the world. And after I finish, I usually send them some of my shots to get their feedback. I also submit some to photography blogs and forums on Reddit as well as posting them on Imgur. I am very open to constructive feedback, and when other photographers see that you are trying to improve, they are very helpful.

So those are five tips that I always try to keep in mind whenever I go out to take sports action photos. If you have others that have helped you, feel free to leave them in the comments section below. Good luck as you continue sharpening your skills as a sports action photographer! Until next time . . .
at October 22, 2017