Color vs. Black & White: When Should You Convert?

Digital photography has given us two things since arriving on the scene nearly 30 years ago. The first is instant feedback with no additional costs. If you don't like the photo you just took, you can just take another one. In fact, you can take as many as you want because unlike shooting with film, it's not costing you extra money. The second thing digital cameras have allowed us to do is experiment in ways that we couldn't before. And one of those ways is figuring out whether the photo you took would look better in color or in black and white.

There are many reasons why you would want to go with a color photo. If vibrant colors are the main theme, and you have several distinct hues present, it is obviously the best option. Here is an example of what I am talking about. The shot below is the starting line of a half marathon run in Phoenix last week. One of the fun things I like about these races is seeing all the different colors people wear.  You see everything from basic black to the brightest neon.  I liked the different combination of colors in this shot. That is the main reason I wanted to get a decent photo of the runners at the start of the race. 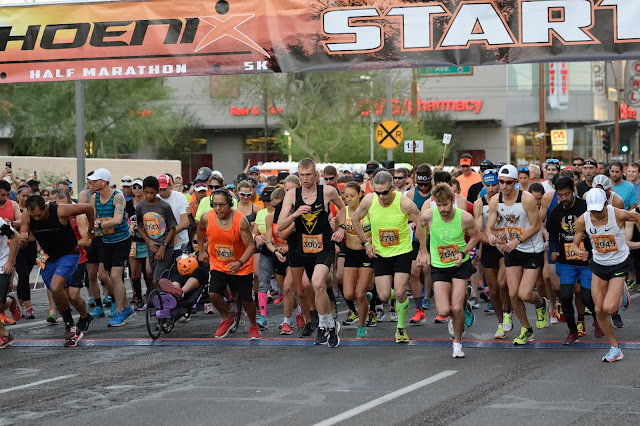 But take a look at the same shot in black and white. It has lost much of its appeal since you can't distinguish between the colors the runners are wearing. You can't see the neon green and bright orange shirts or all the different colors of running shoes. In this case, converting the shot to black and white has removed the most appealing aspect of it. At least to me it has. 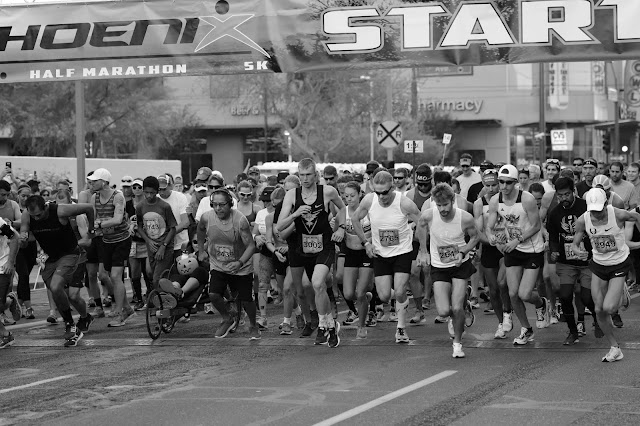 Now I wanted to share a photo from the same race that I think is enhanced by converting it to black and white. Here is a shot of one of the race leaders. In fact, he is fourth from the right in the photo above and ended up finishing second.  I was standing about 150 yards from the finish line when he came by me. 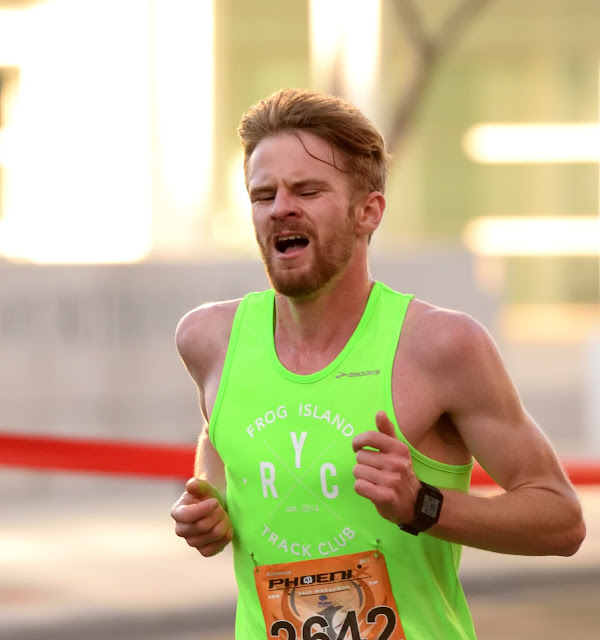 There are a couple things I like about this shot. First of all, I know exactly what he is feeling at this moment. He is digging deep to find any remaining energy to get himself to the finish line. With an ISO of 1600, and an aperture of f/3.5, I feel like I've gotten the desired depth of field that keeps you focused on the runner and what he is experiencing. But I don't like the red tape in the background. It was there to separate the half marathon home stretch from the 5K, which was on the other side of the street. Cropping it out was not an option because I would have cut off the runner's arms at the elbow. That would have looked pretty silly. Then it occurred to me that I didn't need color to tell the story in this photo. The runner's bright green shirt and colorful racing bib had nothing to do with the shot. And even though I tried to minimize the impact of the red tape by going with a more shallow depth of field, it is still a distraction.  The story of this photo was all about the physical duress that this runner was dealing with just 15-20 seconds from the finish line. That is what I wanted to convey. So I converted it to black and white. 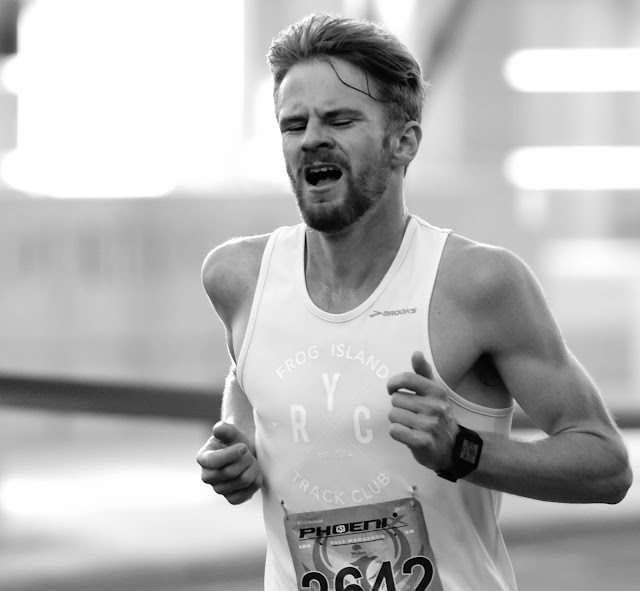 The converted photo is a significant improvement to me. I've said before when it comes to sports action photography, it's the emotion that brings the shot to life. And in this case, the conversion to black and white eliminates all the distractions and focuses your attention right where I want it; on what this runner is physically experiencing as he guts out the last 150 yards of a half marathon. The shot feels a lot more gritty now. It's not hard at all for me to imagine what this runner is going through. I just don't think the color version of this photo comes close to achieving the same effect.

There is one general rule that the professional photographers agree on. The best way to capture the images you are considering for conversion is to shoot them in the RAW format. You have a lot more flexibility that way. You can check out how the image looks in black and white without losing any of color information in the event you want to make some changes later. If you were to shoot them in black and white and then save them to a JPEG format none of the color information would be stored.

So when you are thinking about converting a color photo to black and white, think about the story you want the photo to tell. Ultimately, the direction you decide to go is completely up to you. Like anything else when it comes to photography, the more practice you get, the more you will get a sense for when to convert the image and when not to. If you determine that your decision has increased the impact of the shot, you have made the right choice. Have fun practicing! Until next time . . .