One thing very cool thing about Phoenix is that it's located in a basin surrounded by mountains in the middle of a desert. That's why its called "The Valley of the Sun." Granted, these aren't the Rocky Mountains, but there is enough elevation to give you some pretty nice views of the entire city.

One of these places is South Mountain State Park. It is about eight miles south of downtown Phoenix. Dobbin's Lookout, its highest point, overlooks the city and sits at an elevation of over 2,300 feet. It's a favorite destination in the park for hikers. Now, while I don't mind walking to get to certain shooting locations there is not always time. So one of the reasons Dobbins Lookout is one of my favorite spots is that I don't have to hike all they way up there. I can just drive my car to the top. There are plenty of great views throughout the park. But this is the best one for getting views of downtown Phoenix.

On this particular visit, I wanted to get some shots as the sun was coming up. It's about to 23 miles to South Mountain from my home in the West Valley, so I left in time to get there about 45 minutes before sunrise.  I set up my tripod and took the photos with remote to eliminate camera movement. The shot below was taken about five minutes after official sunrise using a shutter speed of 1/50s, at f/5 and ISO 640. Clearly, the main focus here was the skyscrapers, but I was also wanting to show the changes in elevation as you get deeper into the shot. In the foreground, you can see all the residential, small business and industrial areas. There probably aren't any buildings more than 20-30 feet high. Then you see downtown, where there is a dramatic leap in the height of the buildings. Chase Field, the home of the Arizona Diamondbacks is just slightly right of center about an inch and a half up from the bottom of the photo. It's kind of tough to make out, but it's in a gap between two taller buildings. The sun is just out of frame to the right and is starting to hit the taller buildings. Finally, as you move further into the shot, you see the Phoenix Mountains to the north. They are close to the same elevation as the South Mountains where I am. You can also see the morning haze in the distance, which usually burns off within two hours of sunrise. The best thing about taking photos at Dobbin's Lookout is that it is so peaceful. It's definitely a great place to take photos early in the morning if you don't mind getting up well before sunrise.

But there are other interesting things to shoot at Dobbin's Lookout. The stone shelter you see below is the location's signature landmark. I took this shot a few minutes before the one of downtown: 1/60s shutter speed, f/16, ISO 100. The sun has just come over the mountain behind me and is catching the south facing part of the structure. This was one of my favorite shots of the morning.

Before leaving, I drove to another part of the park to get some pictures of the desert landscape. By this time the sun was much higher in the sky. Since it doesn't rain much here, it only takes a little to make the desert vegetation to really pop. This location was on the west side of the park along one of the hiking trails. Again, you can get a sense of the rapid elevation changes from where I am standing in that little valley full of Seguaro Cactus to the top of the South Mountains. 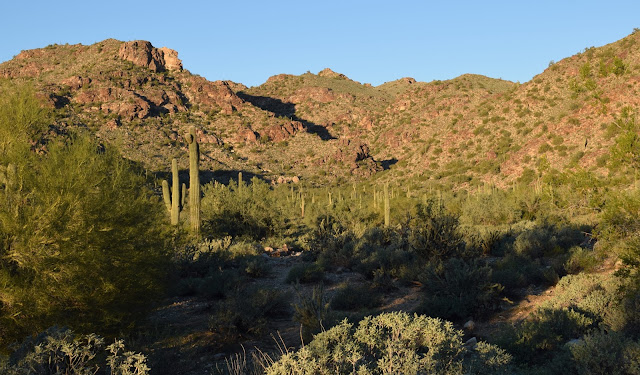 So there you go. South Mountain State Park is a terrific place to take photos of the entire Metro Phoenix area. But that isn't all. Whether you are looking for cool structures to shoot or some beautiful desert landscape, you can't go wrong. If a trip to the Valley of the Sun is in your future, do yourself a favor and get to South Mountain to take some photos. Trust me, you'll be glad you did.  Until next time . . .